Sauces for Sushi – Inspiration from Vizen 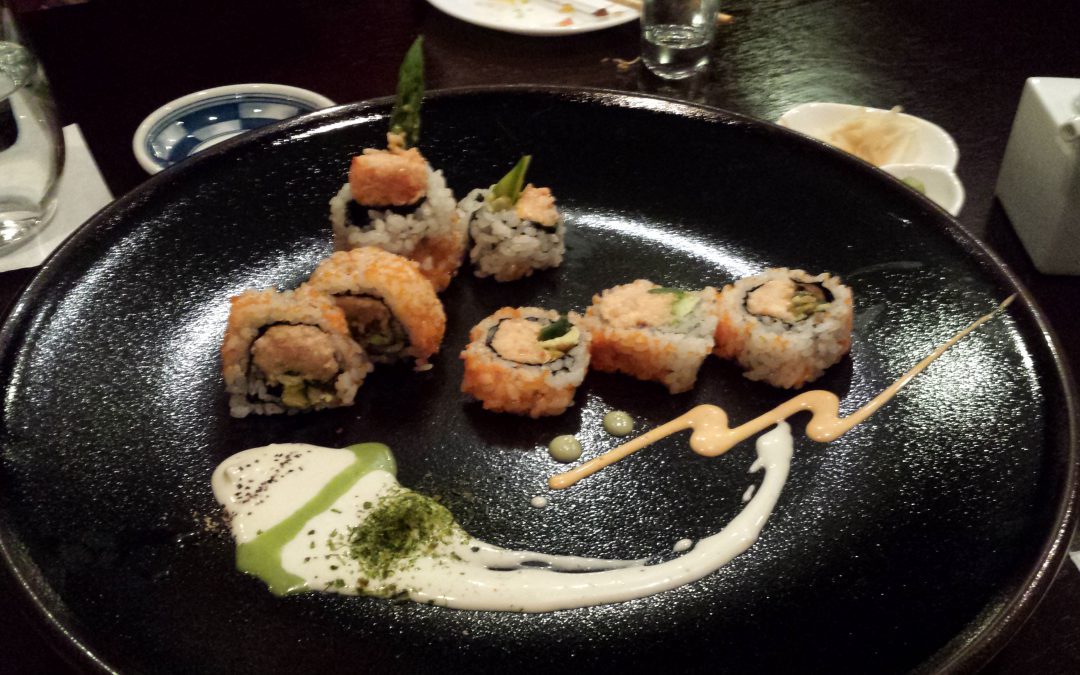 For the purists, great sushi needs very little sauce or flavor – the fish and the rice need to be the central, focal point of each morsel.  Soy sauce, a bit of wasabi, and some pickled ginger afterwards is the limit for many sushi foodies.

The mold was broken by a number of creative, renegade Japanese chefs such as Nobu Matsuhisa and Masaharu Morimoto who fused international ingredients with traditional Japanese cuisine.  The concept of Vizen, a wonderful little Japanese restaurant in Sarasota, FL, aims at taking the Asian Fusion movement one step further with there creative combinations.
There were some old standards on the sushi menu, including toro (fatty tuna), tako (octopus), and eel flavored with Nitsume. While the sushi was high quality, with beautifully prepared rice, the shinning stars of the restaurant were the fusion dishes.  We had a fresh cobia tataki, and a tuna tataki, that were both visually beautiful and laced with outstanding matching sauces.  Dollops of basil pesto and a balsamic vinegar reduction, both more apt to be part of an Italian dish than a Japanese plate, worked very well with the lightly seared rich tuna.  The crunch from the fried potato strings was a nice contrast against the soft fish.  Fresh cobia is now in season, and can be found in many Florida fish restaurants:  Vizen’s version of cobia was perfectly fresh, and was lightly seared like the tuna tataki.  It was certainly the best version of this fish we’ve tasted in Florida.
There are two chalk boards that list the daily specials, where a number of special rolls were listed.  We tried their crunchy roll with salmon, and their lobster salad roll.  The crunchy roll was finished with smelt roe, which was a very delicate addition that complimented the fish.  The saucing was a traditional, but with a very artistic plating of spicy mayo and wasabi paste.

The best, and the most creative saucing was done with the lobster salad roll.  The chef integrated a small amount of a green jalapeno sauce was a large smear of a lightly flavored blue cheese dressing – a strange combination that strangely worked.  In fact, the jalapeno sauce itself was a masterful creation – a smooth, light sauce with just a bit of heat and the clear taste of jalapeno.

We went back to our test kitchen to attempt to create both the blue cheese sauce and the jalapeno sauce that went so well with the sushi.