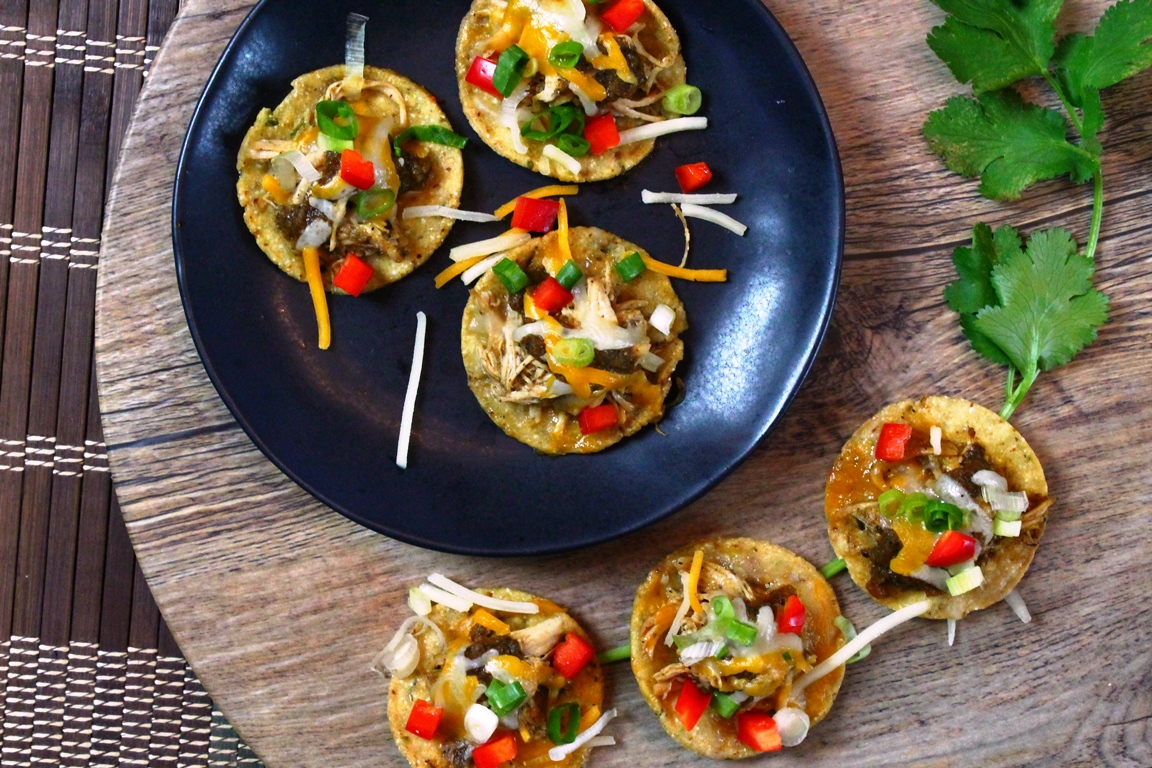 If your looking to improve your nachos beyond a scatter of tri-angled-shaped corn chips on a plate with store bought salsa and some cheese wiz, then you’ve come to the right place.  A good plate of nachos can be a hit at any time, but a great plate of nachos can put you on a foodie pedestal.  Whether it’s Super Bowl Sunday, Cinco de Mayo or just your average TV-binge-watching night, few things are more satisfying than digging into a heaping pile of flavorful oozy goodness. Let’s look at the beginning for a second – an urban legend (or, according to Saveur) has it the a man named Ignacio “Nacho” Anaya created the binge-worthy dish for a group of U.S. Army wives in the border town of Piedras Negras, Mexico, just across the border from Eagle Pass, Texas.  Maybe it’s true, but I’m still not naming my kids “Nacho”. Nachos aren’t subtle, and they’re also not fussy. They’re multicultural, so go ahead and mix it up a bit (South American, Asian, or go two all-beef-patties-special-sauce-lettuce-cheese-pickles American style). But with all those potential contrasting flavors and ideas, there’s an inescapable common denominator:  a flavorful crunchy base (tortilla chips, fried wontons, baked […] 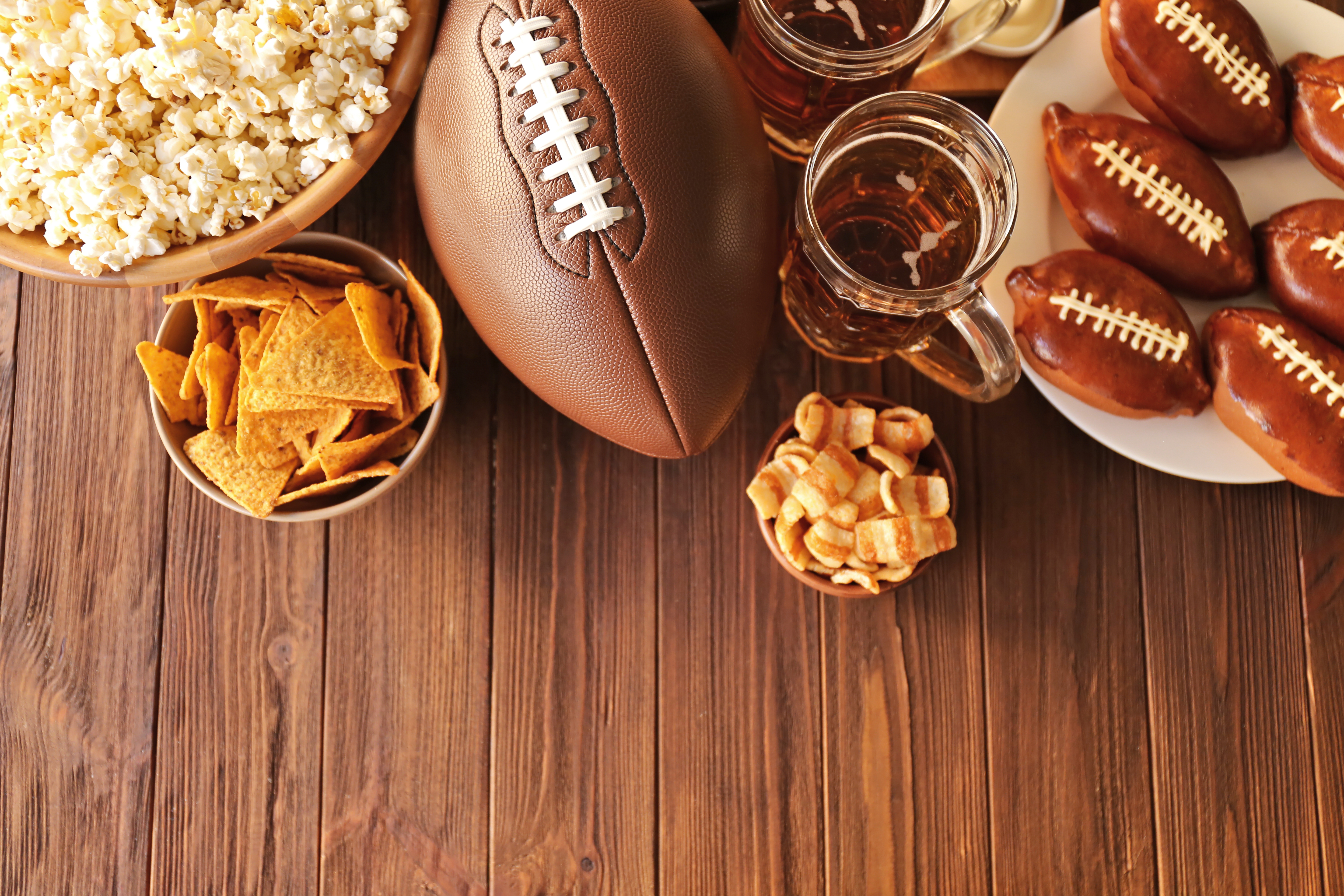 Super Bowl parties – or any time you bring a group of friends together – doesn’t need to mean lots of time in the kitchen, or a quick run to the local take-out place. It’s pretty easy to pump up your parties with some simple tricks, using flavorful ingredients. Take popcorn, for instance.  We did an article on why you should make your own, and why everyone will rave about your popcorn (click HERE).  And you can pull the same trick with any nut mixture, Chex, etc (click HERE).  Just take some unsalted nuts and/or Chex, toss with some healthy oil (we prefer sunflower), then toss with your favorite spice rub from the Serious Foodie .  Bake at 250 deg for 1 hour, tossing every 15 minutes. How about the world’s easiest fancy finger food –   crostini (or bruschetta; click HEREfor an explanation about the differences).   We featured a crostini recipe with brie, arugula, and Serious Foodie Fig/Orange sauce  (click HERE), along with links to other websites for other crostini recipes.  Check out these cool crostini recipes: Kale & White Bean (click HERE), Sweet Potato & Feta (click HERE), Radish & Miso Butter (click HERE), and Smoked Trout & Apple (click HERE). And the […] 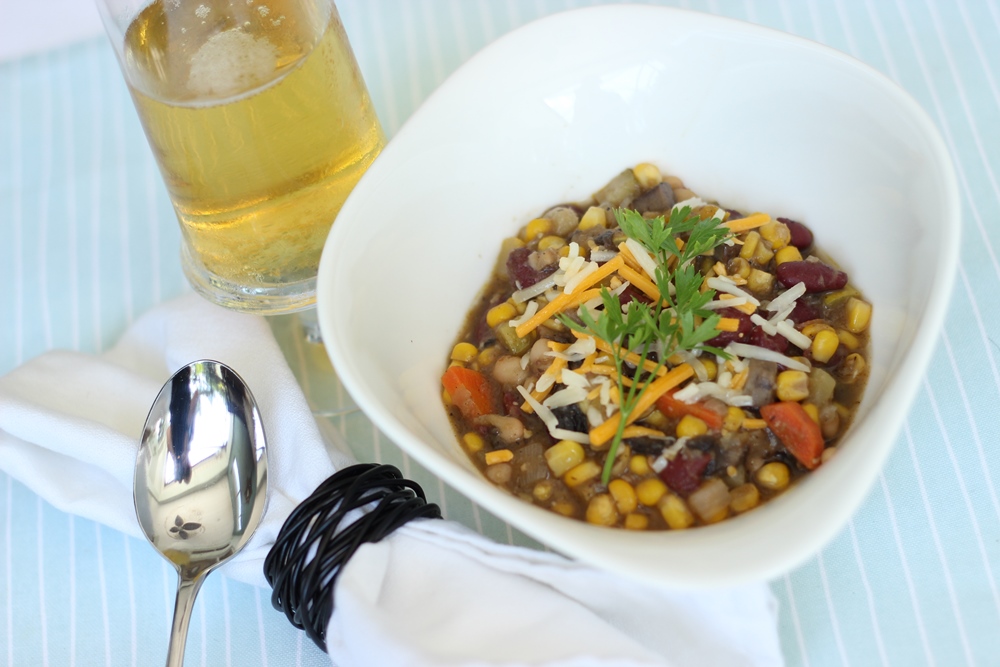 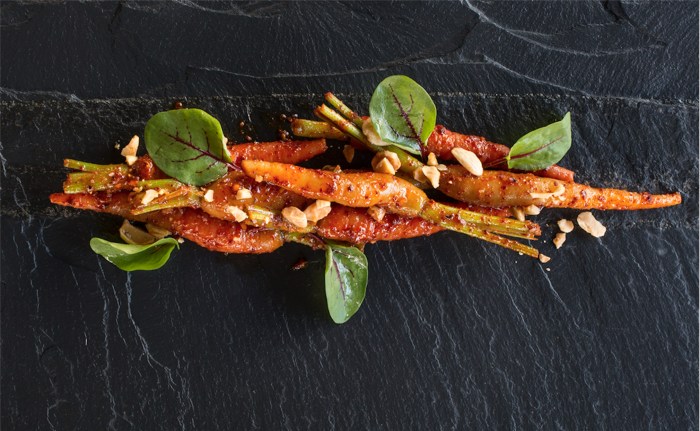 Spicy Moroccan Carrot Salad: picture courtesy of Tal Ronnen [Updated December 28, 2020] There is a wonderful Israeli restaurant in Philadelphia called Zahav, created by the brilliant chef Michael Solomonov.  Pre-COVID, we had the pleasure to sample many wonderful dishes, many of which were vegetarian. One of the standouts was their spicy carrot salad, which became the inspiration behind this blog (see last recipe below). We came across a few similar recipes, and came up with a few of our own. These are simple and elegant, the type of dish you want to do for a party or your significant other.  They can be made as appetizers, side dishes – or vegetarian main courses.  We are reprinting our favorites, and we hope that you’ll be intrigued enough to try a few. Spicy Moroccan Carrot Salad Recipe Type: Vegetarian Cuisine: Moroccan Author: Tal Ronnen Prep time: 1 hour Cook time: 10 mins Total time: 1 hour 10 mins Serves: Serves 4 This recipe was found at the Joy of Kosher website (click HERE  for the original version). Recipe reprinted from Crossroads by Tal Ronnen. Ingredients 1 ½ pounds small rainbow carrots (about 24), tops trimmed 8 dried red chilies, such as […] 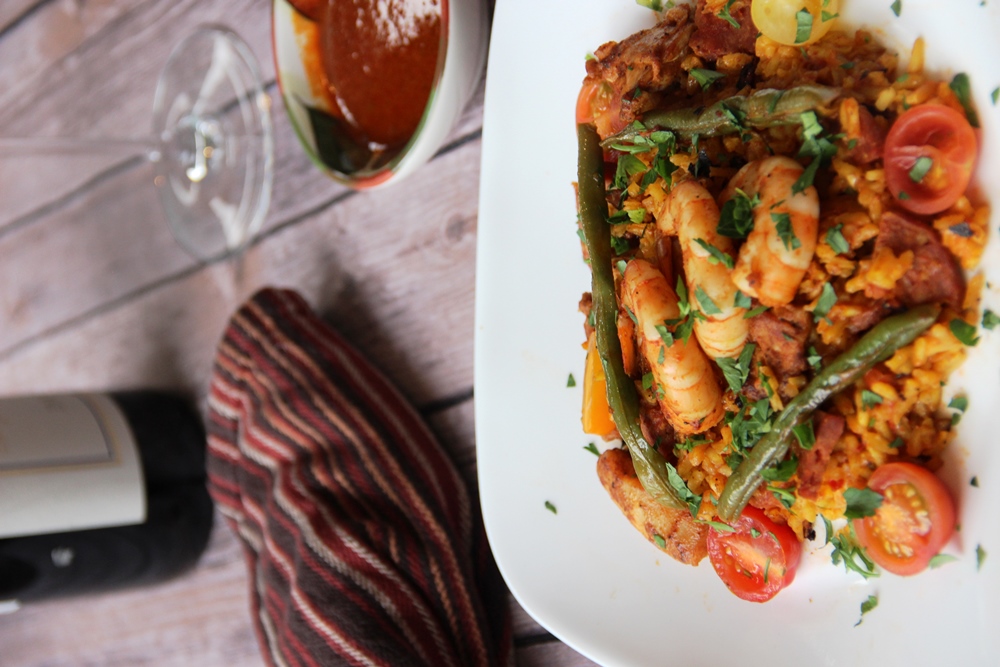 Week Night Paella We love paella, and we usually have to  wait for a weekend with nothing to do but work through all the steps to make a proper batch.  We came across a recipe while watching one of our favorite food shows – Christopher Kimball’s Milk Street.  We learned so much about the origins of paella, and the regional variations from their article.  But most importantly, their chefs came up with basically a one-pot meal which can be made in less than an hour. We’ve modified the recipe so that you can use our Serious Foodie Spanish kit, which contains rice and seasonings that will make this your new go-to Spanish comfort food meal.  We’ve also changed a few ingredients, adding chorizo and shrimp, and eliminating cannellini beans. Print Recipe Week Night Paella This version of the Spanish classic is easy to make using the Serious Foodie Spanish kit. Votes: 0 Rating: 0 You: Rate this recipe! Cuisine Spanish Prep Time 20 minutes Cook Time 20 minutes Passive Time 30 minutes Servings people MetricUS Imperial Ingredients 1 package Serious Foodie Spanish blend Available only in the Serious Foodie Spanish kit1 pound boneless, skinless chicken thighs patted dry, trimmed, cut […] 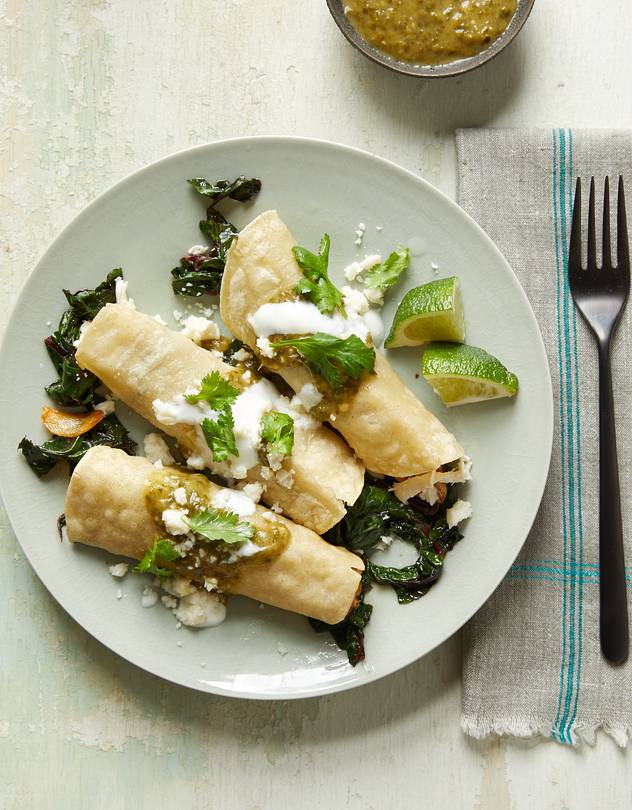 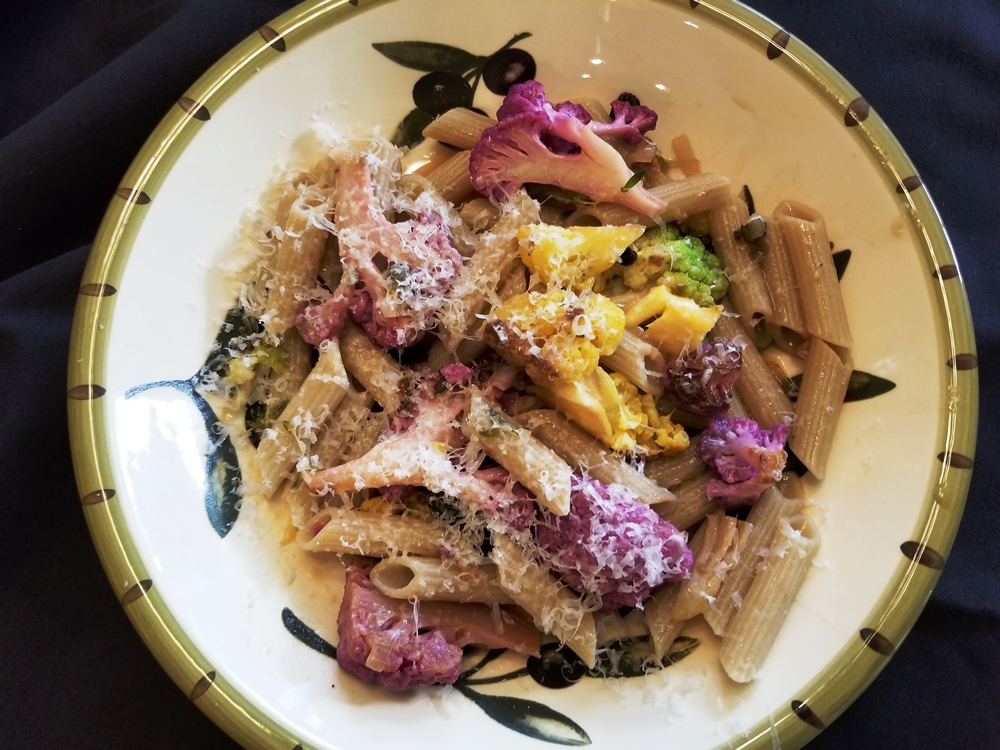 Sicilian-Style Pasta with Cauliflower We came across a package of tri-colored cauliflower, and we got inspired to find a recipe that was a bit different than our usual steamed, roasted, or sauteed cauliflower.  We wanted to highlight the color and flavor of these amazing looking vegetables, and create a satisfying main dish that fits our new vegetarian diet. This recipe uses the Sicilian concept of sweet/spicy/salt/sour.  And it’s simple, and delicious.  Even though Calabria is not strictly Sicilian, we add some of the Serious Foodie Calabrian Pepper Relish to spice up the dish – the Sicilians also love their spicy peppers. Print Recipe Sicilian-Style Pasta with Cauliflower The real trick to this recipe, and most pasta recipes, is to make sure that the pasta is cooked a bit less than al dente. Adding the pasta to the sauce, and simmering for 5 minutes, will infuse a lot of flavor into the pasta. Votes: 0 Rating: 0 You: Rate this recipe! Course Main Dish Cuisine Italian Prep Time 15 minutes Cook Time 30 minutes Servings people MetricUS Imperial Ingredients 3/4 lbs. Whole grain pasta We use the Ancient Grains version with brown rice and quinoa.1 tablespoons Kosher sea salt1/4 cup Extra […] 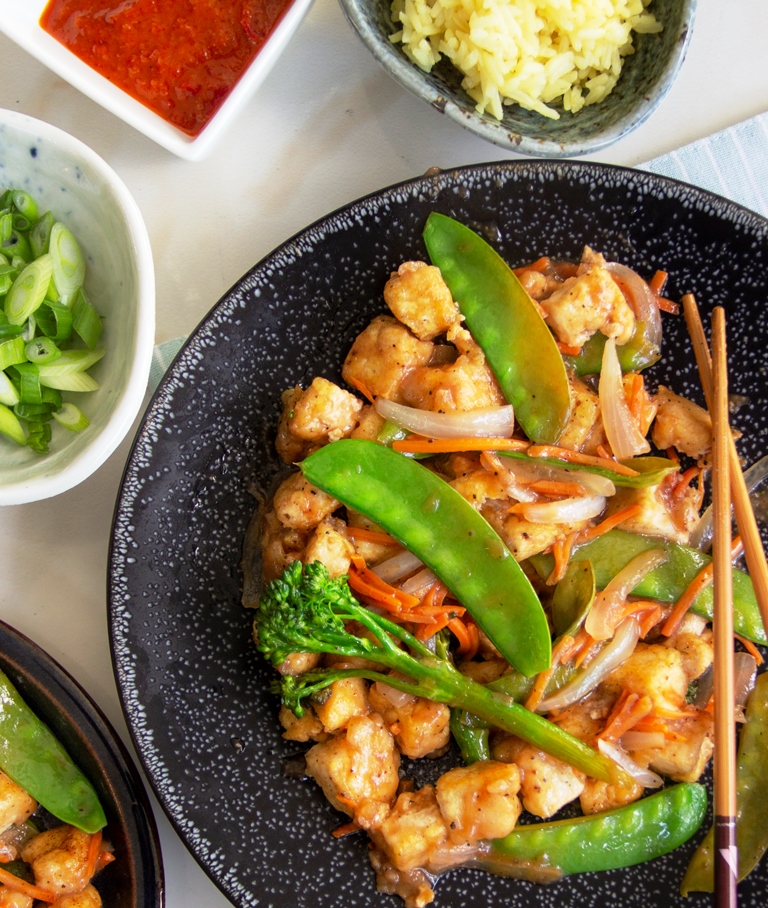 Crispy Tofu Stir Fry – New Zealand Style New Zealand cuisine is a true fusion culture – a great mix of indigenous ingredients, and a blend from the Europe and Asian tastes.  The Serious Foodie Tamarillo Grill Sauce  captures the essence of New Zealand cuisine: tangy, sweet, savory, spicy, and completely unique, using the imported tamarillo (see our Stories for more information on this relatively unknown fruit). This sauce can be used directly on almost any protein – but in this recipe, it is indeed the star ingredient of a vegan main dish that uses crispy tofu.  This recipe comes together in minutes – just depends on how fast you can prep the vegetables. Print Recipe Crispy Tofu Stir Fry – New Zealand Style While we like to keep this recipe vegan, you can substitute chicken, fish or pork for the tofu. Serve with rice or noodles. Votes: 0 Rating: 0 You: Rate this recipe! Course Main Dish Cuisine Asian Prep Time 10 minutes Cook Time 10 minutes Passive Time 45 minutes Servings servings MetricUS Imperial Ingredients 8 ounces extra firm tofu It is important to use extra firm2 tablespoons corn starch2 tablespoons neutral vegetable oil We use grapeseed oil2 […] 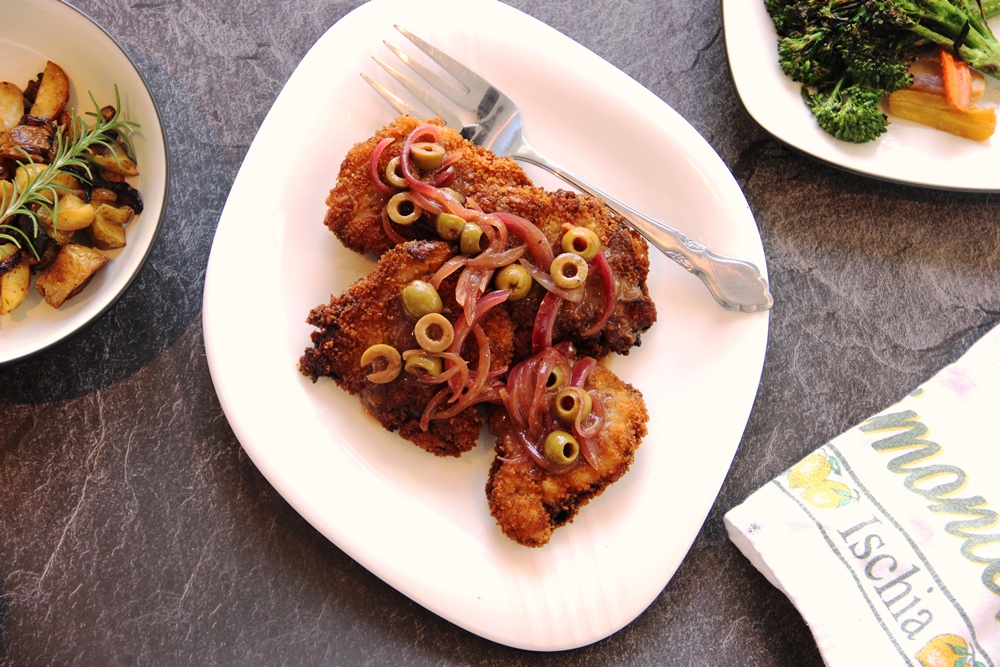 Pork Tenderloin with Fig, Onions, and Olive Sauce The traditional Italian fried cutlets usually do not start with pork – think veal Milanese, or the Italian-American chicken parm.  At Serious Foodie, we love to use pork – especially pork tenderloin.  It is a lean cut that soaks up flavors, and this recipe is full of flavor.  You can use pork cutlets from your butcher, but making cutlets from scratch allows for a much better product in the long run. This recipe is a bit of a throw-back for us, celebrating the flavors of Southern Italy with a sweet/sour/savory/salty combination that had everyone in the test kitchen licking their plate.  The dish is super simple and fun to make with our Serious Foodie Southern Italian Fig/Orange sauce.  We combined the dish with our rosemary roasted potatoes and broccolini and baby carrots dressed with EVOO and lemon juice.  This dish also works well with simple salad of baby arugula and thinly sliced red onions. Print Recipe Pork Tenderloin with Fig, Onions, and Olive Sauce For an extra-crisp crust, we use panko instead of standard bread crumbs – but you can go with any good quality bread crumb you’ve got in  your pantry. […]