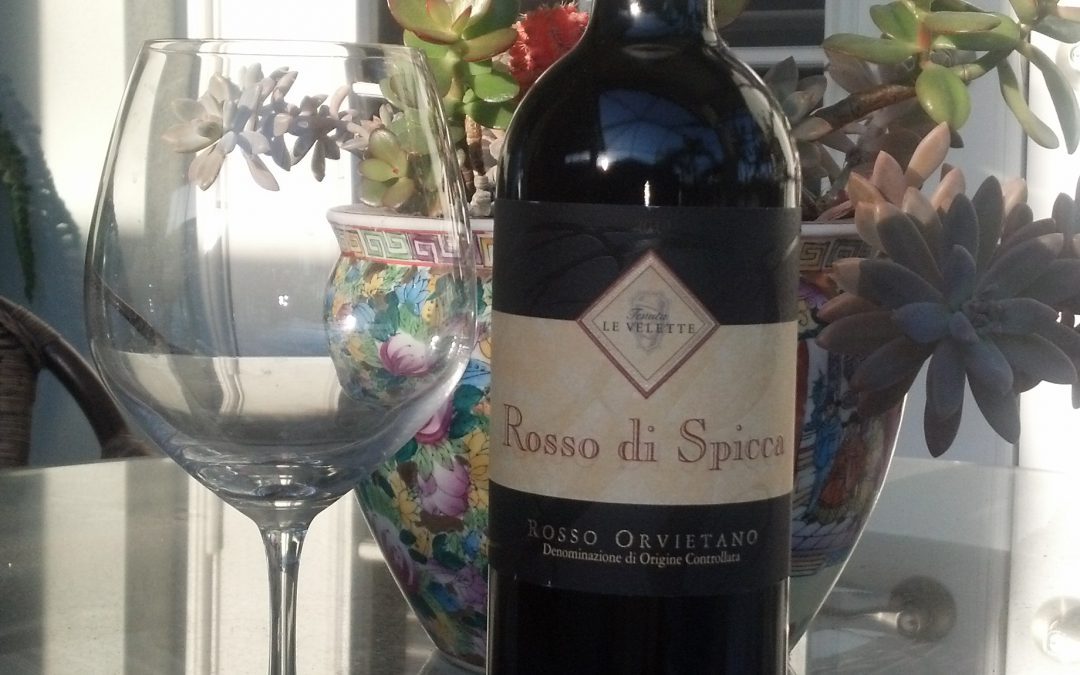 We start this series of 20 under $20 with one of the best, most alluring, and maybe the most obscure wines of Italy.  Rosso di Spicca (Pronounced Row-So dee Spee-ka) is a Ovietano Rosso – a red wine coming from the Ovieto region of Umbria in central Italy.  Many people know the white wines from Ovieto, and there are many good, and a few great, Ovieto white wines.  The vast majority of the Ovieto white wines are under $20, so you will see a blog about these very soon.
But most folks, even my go-to Italian wine merchant (Will at www.italianwinemerchants.com/) were a bit stumped by these hidden gem.  We first came across this wonder in the wine store attached to our favorite Italian market in Florida (Mazzaro‘s in St. Petersburg – as for Jeff). We were looking for an interesting red wine that would match well with an array of food flavors – and Jeff from Mazzaro’s said this was the best.  He was right.
The Ovietano Rosso is a relatively new designation, being recognized as a DOC in 1998.  We coined it as the Chateauneuf de Pape of Italy because it is typically made from a blend of Italian grapes, some common and others not so common, as well as French varieties grown in Italy.  So, let’s start the litany of of grapes that go into this wine:  Montepulciano, sangiovese, aleatico, caniolo rosso, ciliegiolo, cabernet franc, cabernet sauvignon, merlot, and pinot nero (pinot noir). Each producer may make many different wines, depending on the blends, and can produce varietal wines if one grape dominates by 85% or more.
Rosso di Spicca from Tenuta Le Vilette has Sangiovese (85%) and Canaiolo (15%) – sometimes merlot is also included –  and has a unique fermentation process: The fermentation takes place in cement tanks, then put in oak barrels for  4 to 5 months. The wine then once more goes into cement tanks for a few months before being bottled and put on the market.
The grapes are usually harvested late in the season.  This wine is intense ruby red with purple tints, has a bit of a fruity aroma with a hint of chocolate. The ripe cherries taste that dominates the first part of the taste comes from the sangiovese grape, but then comes the combination of surprises, primarily the light note of vanilla and a hint of mint with an underlying stone fruit finish. Fruity on the palate, with good tannic character and freshness, it is pleasantly rounded and harmonious. We’ve served it with pasta having strong flavors (pancetta and leeks, or a veal-based red sauce), but also used it with fish (monkfish with a red wine and mushroom sauce).
We originally found a bottle for $17, and were able to purchase a case for an average price of under $15 (from the Italian Wine Merchants).
If you find it, let us know what you think.