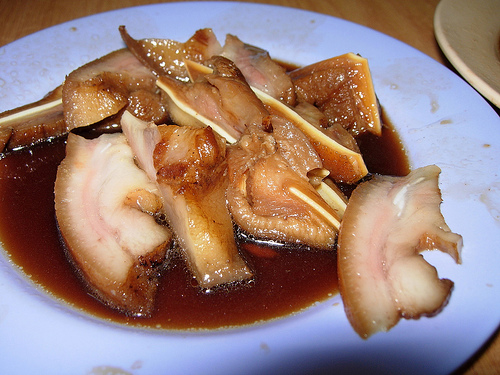 One of MrSeriousFoodie’s most interesting – and challenging – culinary trips was in China.  Most of my time was spent in and around Beijing, but the food choices and variety in the restaurants was like any major modern Western city.

One of the more unusual meals was my first night in Beijing, at a restaurant that specialized in pork dishes.  I am sure that my hosts were testing me.  The specialty of the house was pork three ways:  hoof, intestine, and ear.  I’ve seen and eaten pickled pigs’ feet in my culinary experience, so the hoof wasn’t too weird.  In fact, it was braised in a slightly sweet, slightly sour sauce that was quite good.  The intestines were like tripe, which I’ve also had several times in Italy (it’s the street food of Florence).  It was sauteed with vegetables, and again it was pretty good.  The weird one was the ear – there really is not comparison to anything else I’ve ever eaten.  It was chewy, leathery, and not too pleasant.  I watched my hosts – they all took a bit of it, chewed it for a while, then spit it out.  I did the same, but released the chewy toy from my mouth a bit faster than my hosts.