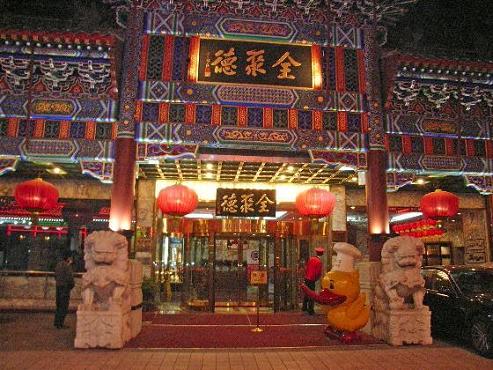 What’s a trip to Beijing worth if you don’t have at least one meal with Beijing (Peking) Duck? I surely wasn’t going to miss out.  The most famous of all the restaurants – and the one that President Richard Nixon dined at – is Quanjude.  We ate at the center city location, which serves up to 5,000 meals a day, and covers a floor area of 15,000 square meters with over forty private dining rooms.  It  can seat 2,000 guests at one time. When you walk through the restaurant, you see rooms and rooms of roasting duck.

Quanjude – Notice the little ducky to the right

There is no doubt that it is important to be there with a Chinese native – I noticed that the tourists were not treated as well as our table.  My hosts said a few words in Chinese, then the food started coming.  And some of it was a bit strange for even my adventurous taste.  For instance, the fried scorpion was only the second insect I’ve ever eaten – and the first was by accident.  Actually, it wasn’t too much different than eating soft shell crabs.

The other very unusual dish was the duck tongue soup.  The DinnerDoctor and I tried to order a similar dish in a NJ restaurant, and the waiter refused to serve it – it was only for their Chinese customers.  I now understand why.  Each tongue is only a few centimeters long, has very little meat, but it is full of bones.  The eating routine was similar to my experience with the pig’s ear – chew for a while, then spit out the rest – hopefully without swallowing too many bones.

By far the star of the show was the duck.   Each duck (at least at the Chinese speaking tables) was expertly carved at table-side.

The meat was tender, and not overly gamey.  The most remarkable part of the duck was the skin – it was like eating duck bacon.  I’ve never had duck with skin so perfect in my life, and I have yet to experience it outside of that one episode.

I was the honored guest that night (or the unsuspecting fool) – so the carver lopped the head off the duck, split it in half, and put it on my plate.  But I surprised everyone at the table – I ate the brains (tasted like sweetbreads), then chewed off the cheek meat, found and ate the tongue (just like before).  My hosts cheered.