Husk in Charleston – Turning a Sow's Ear Into a Silk Purse 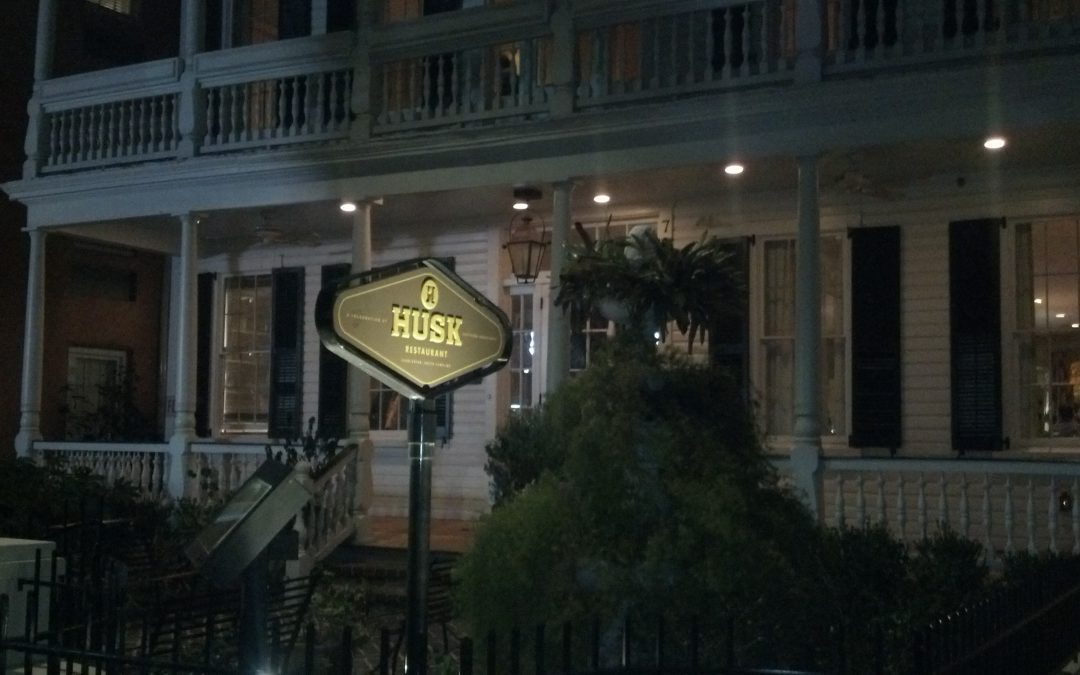 The DinnerDoctor and I had heard a lot about Chef Sean Brock, and heard from so many sources that his food was tops in a town that is now high on the foodies’ radar screen.  In fact, it’s hard to find a (credible foodies) bad review on Husk.  We were certainly astonished by the laid-back, but attentive service, and the rustic atmosphere that somehow still expressed quality.  When you walk into the reception area, you are immediately overwhelmed by the list of almost every purveyor of a major ingredient at Husk scrolled on a huge blackboard.  This is an amazing attention to detail for a farm to table restaurant.
The wine list is well-balanced between New World and Old World – but, on this rarest occasions, we skipped wine, and focused on the bourbon list – and what a list!  We did not see Pappy Van Winkle on the list, but many other fine, rare bourbons were there.  We tried a Jefferson Presidential 21, and their special barrel-aged Manhattan – both outstanding.

Chef Sean’s signature dish seems to be the “Buffalo” Glazed Pig Ear Lettuce Wraps, which was on the menu the night we visited.  Pig ear might sound weird (only had it twice previously in China), but it is ingenious, tasty, and not to be missed.

Likewise, Dave’s Wood Fired Clams, Preserved Tomato Broth with Peperonata and House Made Sausage was intensely layered with flavors.  Each clam was perfect, giving off a slight briny taste matched to the sweet meat – and we soaked up every last bit of broth/sauce.

We had a beautifully done tilefish – which we love and we can’t seem to get in Florida – and the heritage pork chop.  We initially hesitated on this dish, as we’ve seen many top chefs turn a pork chop into shoe leather.  But not this one – it was well-marbled,  moist, and heavenly tasting (the essence of pig).  The accompanying smoked butter beans and Carolina gold rice “Hop-n-John” with collard greens sounds like something out of Mama’s Southern Kitchen, but was far from it – these sides were deftly constructed, and had again an amazing depth of flavor.

We did try the chocolate chess pie at our waiter’s suggestion – it was interesting, but not nearly the same quality of the first two courses.  The rest of the dessert menu did not look too inspiring.

Nonetheless, we would go out of our way to come back, and hopefully they’ll still have the Pig Ear Wraps on the menu.