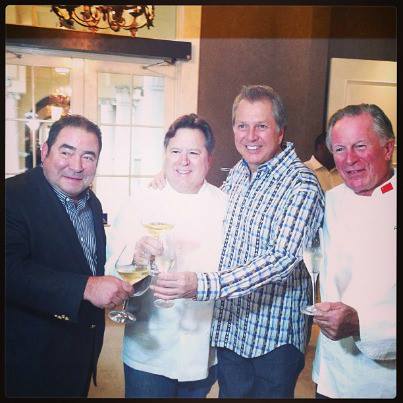 Norman’s in Orlando is one of the most highly touted restaurants in this land of mouse ears and roller coaster rides.  Norman Van Aken is a self-trained, world renowned, James Beard Award winning chef – and we were wondering, during a recent trip, if all the fuss was worthwhile.
Indeed it was worthy of the hype – the DinnerDoctor and our special guest RobinD enjoyed a praise-worthy tasting menu dinner, with wine.  There were many noteworthy moments – including the best version of shrimp and grits that we’ve ever tasted – but it all pales by the fact that we stumbled onto Norman’s 10th anniversary gala, which was happening the next night.  This was a black tie affair, and quite pricey – but it was a once in a lifetime happening.  We ordered the tickets, and back we were for the next night.
The thirteen chefs were a who’s who of the culinary world, including Emeril Lagasse, Jeremiah Tower, Charlie Trotter (who couldn’t attend personally because of health issues), Dean Fearing, and many others including one of the largest gathering of master sommeliers.

Some of the highlights of the evening:

Emeril Lagasse was very generous with his time after the cooking was done – willing to take a lot of pictures with our bevvy of beauties from our table.

The party rocked into the wee hours of the next day, with Norman’s rather extensive bar opened all night.  Somehow the chefs gained an extra wind, and joined the rest of us who decided to hang out.

We keep a personal list of our memorable restaurant experiences, which are many – but our top ten is very sacred, and rarely do we move an experience into this ranking.  This one night certainly is now in our top ten list.

For those who want to see the details of the food and wine, here is the full menu: