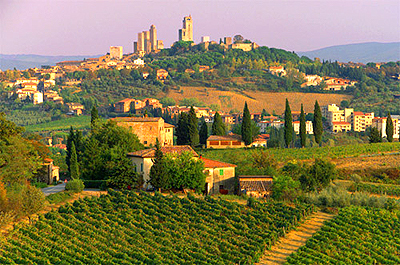 This wine is also considered a Super Tuscan, with a combination of Merlot (25%), Sangiovese (25%), Cabernet Sauvignon (25%),  and Syrah (25%).  It was probably the most unusual wine of the evening, sparking lots of discussion (most likely due to the Syrah).   The grapes are placed in oak tanks for 22 days where malolactic fermentation is completed.  The wine is then placed stainless steel tanks for three months.  The wines are released three months after bottling.
The wine should work very well with red meat and aged cheese, as well as with grilled vegetables.

Why this wine works:
We don’t normally rely on Wine Spectator reviews for the Serious Foodie wines, but they seemed to be spot-on for this one; they’ve rated it “92”, which makes this an excellent buy.  There is quite a bit of red fruit (raspberry, red cherry, red currant),  with a touch of licorice and spice flavors; it has a lingering aftertaste from the same primary fruits.  It is a bit of a power house, and can overwhelm a lot of foods; this wine can use maybe a few more years to mellow out.  We suggested matching it with the grilled vegetables and the grilled steak.
Scoring:
The opinion on this wine varied greatly, from one person giving it a 1, while three people gave it a 5 rating.  Three people rated it as the best wine of the evening.  The average score was 3.44.  The Serious Foodie rated this one the best of the evening, primarily because it was very different than the rest.
Where to buy:
The Serious Foodie tried this wine a few months ago, and was only able to source it from  Chain Bridge Cellars (Mclean, VA; http://www.chainbridgecellars.com/).  Luckily, they can be found on the web, and they ship – $20 per bottle before shipping.  A rare deal on a truly “Super” Tuscan red that will just get better and better with time.